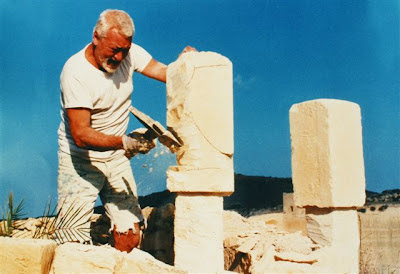 The following subjects were of prior interest to him and his pupils during that time: Spaces | Monuments | Shaman - priest - fetishism | Tone - colour | Descant in painting | From the bottom | Regarding the absurd, the laughable and coincidental in art | There is no such thing as coincidence | Sisyphus | Sisyphus as a cheerful person | The sum of all small steps is the way | Space installation | Stage and stage setting, personal performance | The line between figures | Working with waste | To take what is there | Onwardly - drawing, drawing - onwardly | Collage with linocut and woodcut | Text collage | Cutting lines - following the scissors | To engage with that line (Henri Matisse) | Injuries | Scraffiti and murals | Examination of our surroundings | Examination of common vita.